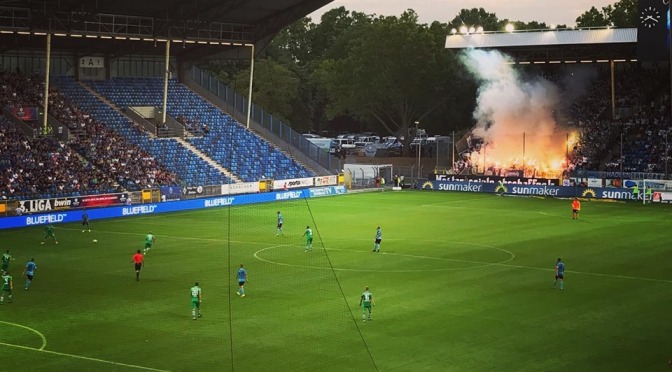 A serene summer’s evening in the south-west of Germany. A cool wind blows from the Rhine and the temperature easily tops twenty degrees. At this point, as I am sure you are all thinking, this is the perfect weather for a football match.

Indeed, it was, and so I headed to watch the 3. Liga clash between Waldhof Mannheim and 1860 Munich at the Carl-Benz Stadion. 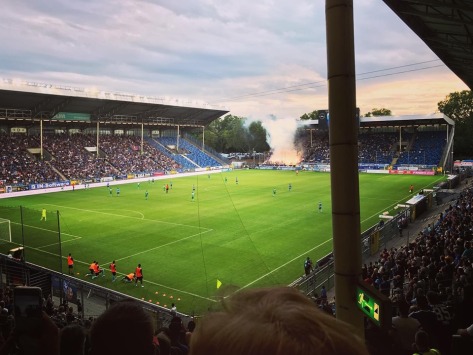 With the S-Bahn as my chariot, I made my way from Speyer towards the Ludwigshafen-Mannheim metropole. It is the Rhine, of course, which separates both cities, but the river also marks the boundary between Rhineland-Pfalz and Baden-Württemberg.

It is noticeable that the small towns through which I pass are adorned with Kaiserslautern graffiti. Indeed, the likes of Schifferstadt and Limburgerhof owe their allegiance to the Rhineland-Pfalz and subsequently the Red Devils, even though Mannheim (itself in Baden-Württemberg) is a mere stones throw away.

With little time to spare, I arrive at the busy Carl-Benz Stadion. Riot police adorn all major arteries from city centre to the stadium, as is seemingly to be expected at any German football match between historic sides, especially those with extremely active ultra scenes.

The visitors from had Bavaria traveled in good numbers, especially considering that the four journey had been scheduled for a Monday evening. This was a fact seemingly recognised by the home fans, as the Ultras Mannheim boycotted the opening twenty minutes; explicitly rejecting Monday as a day for a football match.

Despite the rigours of their journey, the Munich natives were in fine voice from start to finish. Not only were they in fine voice, but the Sechzig fans also produced a visual spectacle; with various forms of pyrotechnic filling the summer evening air with a thin, wispy fog throughout the second half. One can only imagine the frustration in Giesing, the Munich suburb in which 1860 are based, the following morning, as the realisation that a large fine from the DFB would be headed in the Lions’ direction. 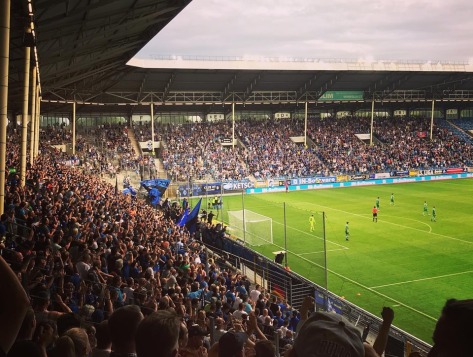 On the pitch, however, things were not as good for the Lions. Indeed, they could not have gone much worse.

Mannheim ran Daniel Bierofka’s defence ragged all evening, producing a four goal display. Whilst 1860 did break the lines upon occasions, perhaps displaying the naïvety of the newly-promoted Waldhof, they were second best from start to finish.

It was the diminutive Gianluca Korte who stole the headlines at the Carl-Benz Stadion. The 28-year-old displayed the talent which has previously prompted the likes of Braunschweig and Aalen to hand him an opportunity in the 2. Bundesliga with a two goal display. Lacking the prowess to physically overcome the 1860 Munich defence, Korte displayed a will-of-the-wisp tendency to be in the right place at the right time. That trait was no more evident than with his first goal of the match, as the 28-year-old displayed the nouse to beat Herbet Paul to the ball at the back post.

Perhaps it was apt that Korte stole the show. After all, the former Braunschweig is a native of Speyer – the town in which I am staying and working in for the entirety of August. 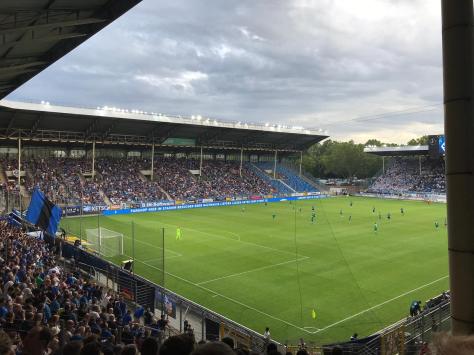 Within the match from the neutral perspective I enjoyed, one could only leave the Carl-Benz Stadion highly satisfied. A great atmosphere had been had, between two of Germany’s more established football clubs, with a contest and scoreline that had provided entertainment throughout.

The ticket price had been reasonable at only €10 for a student (for perspective, an adult ticket in the standing sections came in at only €12), which can be preached both online and on the day if required.

Located in a leafy area of Mannheim’s outer city centre, Waldhof’s Carl-Benz Stadion makes up for what it lacks in amenities by its traditional atmosphere and composition. The club’s ultras scene, the imaginatively named Ultras Mannheim, can be found directly behind the goal in the Osttribüne (quite strangely, an area that is fitted out with plastic seats). Both extreme ends of the eastern stand were what we would consider traditional terraces.

In the mid-2000s, Dietmar Hopp, owner of Hoffenheim, had attempted to merge Waldhof with a number of other clubs in the Rhein-Neckar region in order to create a super-club so to speak. From my experience at the Carl-Benz Stadion, one can only be thankful that those plans never came to fruition.

The eclectic musings of a Manchester City fan, who has fallen in love with German football and a certain provincial Bavarian outfit that are based upon the famous Danube. Confused? So am I.